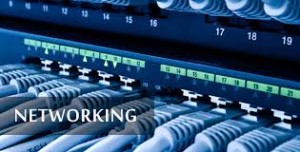 81. What is Beaconing?
The process that allows a network to self-repair networks problems. The stations on the network notify the other stations on the ring when they are not receiving the transmissions. Beaconing is used in Token ring and FDDI networks.
82. What is redirector?

Redirector is software that intercepts file or prints I/O requests and translates them into network requests. This comes under presentation layer.

83. What is NETBIOS and NETBEUI?
NETBIOS is a programming interface that allows I/O requests to be sent to and received from a remote computer and it hides the networking hardware from applications.
NETBEUI is NetBIOS extended user interface. A transport protocol designed by microsoft and IBM for the use on small subnets.

84. What is RAID?
A method for providing fault tolerance by using multiple hard disk drives.

86. What is Brouter?
Hybrid devices that combine the features of both bridges and routers.

87. What is cladding?
A layer of a glass surrounding the center fiber of glass inside a fiber-optic cable.

88. What is point-to-point protocol?
A communications protocol used to connect computers to remote networking services including Internet service providers.

89. How Gateway is different from Routers?
A gateway operates at the upper levels of the OSI model and translates information between two completely different network architectures or data formats.

90. What is attenuation?
The degeneration of a signal over distance on a network cable is called attenuation.