A game is won by the player who first scores 11 points with a 2-point margin. A good service is delivered by projecting the ball from the free hand, which must start from above the playing surface. The ball must be resting in the palm of the free hand.

The ball is tossed into the air. A good return of a served ball must be struck by the receiver on the first bounce so that it passes directly over or around the net and touches directly on top of the opponent’s court. 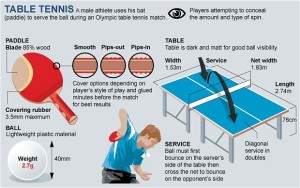 A point is awarded to the opponent in the following circumstances:

A point is scored by the side that makes the last successful return prior to the end of a rally.

An unsuccessful return occurs whenever the ball is missed, is hit off the table, sent into the net, or hit onto the player’s own half of the court on the return.

Failure to make a good service, unless a let is declared

If the player, the racquet, or anything that the player wears or carries touches the net or its supports while the ball is in play.

If the player, the racquet, or any wearing apparel moves the playing surface while the ball is in play or touches the net or its supports