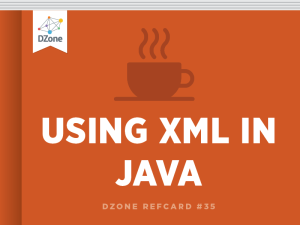 Technology agnostic – Being plain text, XML is technology independent. It can be used by any technology for data storage and transmission purpose.

Extensible – in XML, custom tags can be created and used very easily.

4.What is XML Parsing?
Parsing XML refers to going through XML document to access data or to modify data in one or other way.

Dom Parser – Parses the document by loading the complete contents of the document and creating its complete hiearchical tree in memory.

SAX Parser – Parses the document on event based triggers. Does not load the complete document into the memory.

JDOM Parser – Parses the document in similar fashion to DOM parser but in more easier way.

StAX Parser – Parses the document in similar fashion to SAX parser but in more efficient way.

XPath Parser – Parses the XML based on expression and is used extensively in conjuction with XSLT.

8.What is DOM?
DOM stands for Document Object Model and it is an official recommendation of the World Wide Web Consortium (W3C). It defines an interface that enables programs to access and update the style, structure,and contents of XML documents. XML parsers that support the DOM implement that interface.

9.When to use a DOM Parser?
You should use a DOM parser when −

You need to move parts of the document around (you might want to sort certain elements, for example)

10.What DOM Parser returns?
When you parse an XML document with a DOM parser, you get back a tree structure that contains all of the elements of your document. The DOM provides a variety of functions you can use to examine the contents and structure of the document.